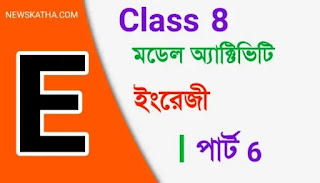 ACTIVIIY 1
Read the following passage and answer the questions that follow:

King Arthur could gift peace and prosperity to England. The greedy barons were unhappy with King Arthur because he was gentle and just. He married the beautiful Lady Guinevere, daughter of the king of Cornwall. On the wedding day, Merlin took him to a richly gilded pavilion, painted crimson and dark blue. The floor was marbled. In the middle of the room was a huge, round, cak table, richly carved, capable of seating fifty people. This was the famous round table around which gathered King Arthur's devoted knights. These knights promised that they would help the helpless, be gentle to the weak and punish the wicked. To keep their vows, the knights undertook countless hazardous adventures. The stories of their goodness and kindness spread throughout the country.

A. Complete the following sentences with information from the passage:

Ans - the king of cornwall.

i) Why were the barons unhappy?

Ans - The barons were unhappy because the king was gentle and just.

(ii) Give a brief description of the pavilion where Merlin took King Arthur.

Ans- The pavilion was painted crimson and dark blue, the floor was marbled. In the middle of the room was a huge, round, oak table, richly carved, capable of seating fifty people.

iii) What did the knights promise King Arthur?

Ans - The knights promised to kingthur that they would help the helpless, be gentle to weak and punish the wicked.

Ans - My father prayed that God might bless me.

Ans - The police officer ordered not to go there.

iii) Ravi said, "The earth revolves round the sun."

Ans - Ravi said that the earth revolves round the sun.

iv) The Headmaster said to me, "Where do you live?"

Ans - The headmaster asked me where I lived.

ACTIVITY 3
Classify the Principal clause and the Subordinate clause of the following sentences and write them in the table given below:

i) As it is raining I will not go out.

ii) It is certain that a barking dog does not bite.

iii) This is the place where Rabindranath was born.

iv) What he says is not true.

v) If you meet Jarin, give her this book.

Write a paragraph in about 80 words on the life of the famous painter and writer Abanindranath Tagore. You may use the following points:

Famous for: Drawing, painting and writing

Ans - On 7 august, 1871 Abanindranath Tagore was born in Jorasanko, calcutta . His parents name was Gunendranath Tagore and Saudamini Tagore. He had a sister, Sunayani Devi. Tagore learned art when studying at Sanskrit College, Kolkata in the 1880s.

In 1890, around the age of twenty years, Abanindranath attended the Calcutta School of Art where he learnt to use pastels from O. Ghilardi, and oil painting from C. Palmer, European painters who taught in that institution. His idea of modernizing Mughaland Rajput paintings eventually gave rise to modern Indian painting, which took birth at his Bengal school of art. Some of his notable painting are Bharat Mata, The passing of Shah Jahan, Ganash Janani e.t.c. Abanindranath is also regarded as a proficient and accomplished writer. Most of his literary works were meant for children. Some of his books like 'Budo Angla', 'Khirer Putul' and 'Raj kahini' are best examples of Bengali children literature. The famous artist died on 5 December, 1951.