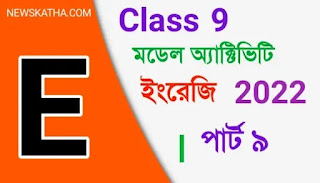 Read the following passage and answer the questions that follow:

I remember another funny incident about Bhola Grandpa related by my father. It had been a rainy afternoon. Bhola Grandpa, wild with excitement, told my father and his friends that he had seen a gang of pirates. They were burying a large box under one of the sand dunes on the seashore by our village. At once father and his friends started looking for the hidden treasure. Evening passed on to night. Moonlight came in through the clouds. A pack of jackals were howling. It was past midnight. At this point of time, Bhola Grandpa confessed that there was no real treasure. It was all a dream which he had during his midday nap.

Once Bhola Grandpa had a great adventure in the Sunderbans. In those days Royal Bengal tigers freely roamed the dense jungles of the Sunderbans. People took care to move about only in groups, particu larly after sundown.

One evening, Bhola Grandpa was returning from the weekly market. Suddenly at a distance of about five yards behind him, he heard the growl of a Royal Bengal tiger. Bhola Grandpa turned and found the bright gaze of the tiger on his face.

Bhola Grandpa instantly climbed up a nearby banyan tree. The tiger roared and circled the tree about a hundred times. Then it settled down under a bush without taking its eyes off him. With nightfall, the forest grew dark and silent. Bhola Grandpa could hear the tiger beating its tail on the dry leaves. Hours passed.

Activity 1
Write the correct answers from the given alternatives:

(i) Bhola Grandpa had seen a gang of pirates -

Ans - in his mid-day nap

(iii) On seeing the tiger Bhola Grandpa climbed up the -

a) What were the pirates doing when Bhola Grandpa saw them?

Ans - The pirates were burying a large box under one of the sand dunes on the sea shore by their village when Bhola Grandpa saw them.

b) Why did people move in groups, particularly after sundown?

Ans- In those days Royal Bengal Tigers freely roamed the dense forests of the Sundarbans. For that people moved in groups particularly after sundown.

Change the mode of narration of the following sentences :

a) Raka said to her sister, "Will you go to the library tomorrow?"

Ans - Raka asked her sister if she would go to the library the next day.

Ans - Mr. Roy says that his nephew is very good at sports.

c) My grandmother said to me, "May you live long."

Ans - My grandmother wished me that I might live long.

Activity 4
Write a story (in about 100 words) using the following hints. Add a suitable title to the story.

Hints: art competition-participants include three artists - one draws a bunch of flowers, another some fruits, third draws a curtain -bees sit on the flowers-birds come to eat fruits-curtain deceives the judges - third artist wins the prize

Ans - A competition among Three Artists

Once upon a time, three great artists lived in a city. They were all skilled artists. They held a competition to decide who was the best artist among them. There was a prize declared for the winners. The judge was also appointed for this purpose. The first artist painted a bunch of flowers. Second of them painted a fruit and third artist painted a picture of curtain. During observation, it was found that the flower was so natural that a bee sat on it for honey. Fruit was so natural that an ox tried to eat. The judge praised all these things. Then he went and saw the curtain. It was so bealed that he tried to move it to enter the room. Flower deceived the insect. Fruit deceived the beast but the curtain deceived the Judge. Thus the third artist won the prize.